It was once regarded as the ‘magic mineral’ but the deadly legacy of asbestos continues to mount. Australia now has the highest rates of the fatal asbestos cancer mesothelioma in the world. Despite well-documented knowledge about its dangers, asbestos use wasn’t banned in Australia until the end of 2003. By then the human toll from asbestos-related diseases had grown rapidly.

Asbestos exposure can lead to asbestosis, lung cancer and mesothelioma. Medical researchers predict the total number of mesothelioma cases will reach 18,000 by 2020. By then, 50 000 Australians will have either died or contracted asbestos-related diseases as a result of their asbestos exposure at home or at work. 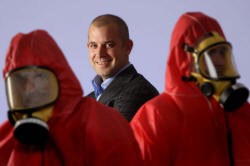 Asbestos is set to become one of the most litigated areas in Australian Industrial courts. On the 28th of April 2008, ACTU president Sharon Barlow released a press statement in which she stated. “The Federal Government needs to launch an inquiry into asbestos looking at elimination from workplaces and homes along with compensation, treatment and cure for those affected.” “There needs to be an urgent improvement in asbestos regulation and tougher enforcement of laws surrounding asbestos.”

Don’t make the mistake of not having your Asbestos Management Policy and Audit is in place.

Global Asbestos Audits has been making sure their clients all over Australia are complying with the changing workplace legislation – Safe Work Australia 2011 and the NOHSC: 2018(2005) and Victorian Regulation 2007. Our reporting services have been acknowledged and requested by Government bodies including Department of Health and Department of Environment and Conservation.

We have been responsible for providing Asbestos Solutions to Federal, State and Local Government bodies as well as Australia’s leading mining and commercial landlords, Corporations, Maritime Industry and Unions.

A Licenced Asbestos Assessor will take your call now

Servicing all areas of Australia

Specialists in regional and remote areas